Re-watch our webinar: Drive innovation with 3D printed PEEK parts for every industry

Our 3D printed parts fulfill the needs of the medical markets.

Patients are aging, staying longer active and demanding more quality of life than ever before. A wide range of medical procedures are required to address this shifting demand. High performing polymers are crucial to fulfill these needs. Ranging from sterilizable materials applied in endoscopy applications, to actual implants, or dental restorations, high performing polymers such as PEEK will play a significant role in this industry.

Bond3D adds a significant opportunity fulfilling the needs in these medical markets. For the first time a 3D printing process can deliver full functional performing materials to these applications. Designs can be integrated or feature advanced bone optimized in-grow structures for PEEK medical products.

Critical parts made from PEEK for the medical industry

These parts can change your industry 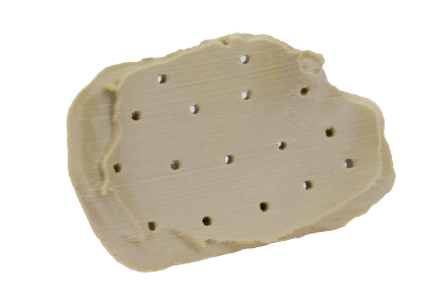 Customized cranial implants can be produced using the Bond3D technology with less waste and faster times.

The US aerospace industry first created polyetheretherketone, or PEEK, in the late 1970s after becoming interested in its high-temperature stability and subsequent potential for high-load, high-temperature applications. PEEK-OPTIMA, a highly pure and implantable grade of PEEK, was introduced to the market by Invibio Biomaterial Solutions in the late 1990s and quickly adopted by the medical device sector. Since that time, the use of medical-grade PEEK has multiplied.

Implantable PEEK is now widely used by medical device manufacturers to increase the biocompatibility of load-bearing implants. Compared to metal implants, it makes implants much more bone-friendly and is also much more compatible with diagnostic imaging.

In the 1980s, PEEK was first used in experimental medical devices. In the 1990s, clinical research led to widespread clinical acceptance, particularly in the area of spine implants. PEEK is steadily replacing current biomaterial standards in a variety of implant applications.

Today’s implantable PEEK polymers come in a variety of formulations, from unfilled grades with varying molecular weight to image-contrast and carbon fiber-reinforced grades. All are produced in accordance with strict quality standards and are supported by full raw material traceability. PEEK-OPTIMA, the first implantable unfilled PEEK polymer, was developed by Invibio Biomaterial Solutions in 1999. In 2007, image-contrast grades and carbon fiber-reinforced variants of the material (which offer significantly increased strength and stiffness) were introduced.

LEARN ABOUT OUR TECHNOLOGY

What is medical grade peek and why is it used in healthcare?

Medical-grade PEEK is a type of polymer that is often used in medical implants and devices because of its biocompatibility and mechanical strength. PEEK stands for polyetheretherketone, and it is a type of plastic that can withstand high temperatures and has a high strength-to-weight ratio. It is commonly used in surgical instruments, spinal implants, and other medical devices.

Bond3D leads the advent of the fourth generation of 3D printed PEEK polymer spinal cages which combines the advantages of all previous generations.

There are several benefits to using medical-grade PEEK in medical implants and devices. Some of these benefits include:

How medical grade peek compares to other materials in the healthcare industry?

Medical-grade PEEK has several advantages over other materials commonly used in the healthcare industry.

Save on weight and support fuel reduction

We believe transforming manufacturing is a team effort. Let’s get in touch and discuss how we can help you take the next step.

At Bond3D we take quality extremely serious. Through rigorous quality checks we can ensure the safety, reliability and compliance with regulations of our processes and products. This allows us to control and continue our growth without disrupting quality and continuity. Bond3D is proud that we are ISO 9001 Certified.

We use cookies on our website to give you the most relevant experience by remembering your preferences and repeat visits. By clicking “Accept”, you consent to the use of ALL the cookies.
Cookie settingsACCEPT

This website uses cookies to improve your experience while you navigate through the website. Out of these cookies, the cookies that are categorized as necessary are stored on your browser as they are essential for the working of basic functionalities of the website. We also use third-party cookies that help us analyze and understand how you use this website. These cookies will be stored in your browser only with your consent. You also have the option to opt-out of these cookies. But opting out of some of these cookies may have an effect on your browsing experience.
Necessary Always Enabled
Necessary cookies are absolutely essential for the website to function properly. This category only includes cookies that ensures basic functionalities and security features of the website. These cookies do not store any personal information.
Non-necessary
Any cookies that may not be particularly necessary for the website to function and is used specifically to collect user personal data via analytics, ads, other embedded contents are termed as non-necessary cookies. It is mandatory to procure user consent prior to running these cookies on your website.
SAVE & ACCEPT
Go to Top